Bonnie B. Latino, co-author with Bob Vale of the award-winning novel YOUR GIFT TO ME, posted the following on her Facebook profile. I am posting this here with her permission: 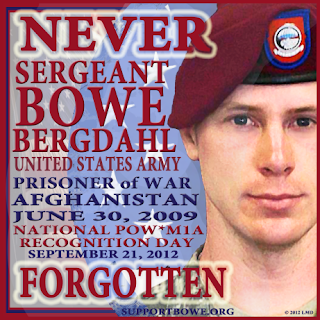 I want everyone to know that today, March 28, is US Army Sgt. Bowe Bergdahl's 27th birthday.

It is the FOURTH birthday Sgt. BERGDAHL has spent in captivity. He is the only POW of the War in Afghanistan. He was taken June 9, 2009, and is believed to be held by the Taliban, possibly in Pakistan.

As Sgt. Bergdahl's birthday gift, I pray for his physical, emotional, and spiritual health.

I hope my friends will join me in remembering Sgt. Bergdahl today ... And every day until he returns home.
___

Phyllis Zimbler Miller is the author of the 2008 Amazon Breakthrough Novel Award semifinalist MRS. LIEUTENANT and the co-author of the Navy thriller LT. COMMANDER MOLLIE SANDERS. Phyllis is the co-founder of the marketing consulting company Miller Mosaic LLC, which works with clients to attract more business. Read her book-related posts at www.PhyllisZimblerMiller.com
Posted by Unknown at 2:15 PM No comments:

(And if you do not have a Kindle, get a free Kindle app for other devices at http://budurl.com/freeKindleapp)

March is Women's History Month — a very appropriate time to offer my novel MRS. LIEUTENANT for free on Kindle.

The story is inspired by my own experiences as a new Mrs. Lieutenant in the spring of 1970 right after the Kent State shootings. I experienced friendship with women whom I never would have come in contact with had my husband not gone on active duty at Ft. Knox with the U.S. Army.

This particular time was a very interesting slice of women's social history, right at the beginning of the women's liberation movement. But for those of us who were new Mrs. Lieutenants, we had very specific expectations to be met.

Here is a quote from the “Mrs. Lieutenant” booklet we had to follow:

It has been said that when a man acquires a commission, the government has gained not one, but two — the officer and his wife.

Another piece of advice from the same booklet:

If the wife is well informed as to what is expected of her, the probability is greater that the officer will have an easier and more successful career.

MRS. LIEUTENANT was selected as a 2008 Amazon Breakthrough Novel Award semifinalist. I hope you will click here to download a copy and enjoy the story.

And after reading MRS. LIEUTENANT, click here to check out two other women's military fiction novels.

Click here to visit her Amazon author page at viewAuthor.at/PhyllisZimblerMiller

She also has an M.B.A. from The Wharton School and is the co-founder of the online marketing company www.MillerMosaicLLC.com
Posted by Unknown at 5:45 PM No comments:

INSIDE COMBAT RESCUE and Inside the Life of a Mrs. Lieutenant 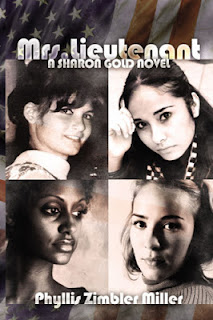 While watching the episode, I found myself comparing the action to battlefield rescue during the Vietnam War. As my novel MRS. LIEUTENANT describes, the American public watched nightly news footage of wounded and dying men on stretchers being rushed to rescue helicopters under attack.

Then the grim task of triage set in. While perhaps with vastly improved battlefield medicine these wrenching decisions are not needed as much today, here is what one character in MRS. LIEUTENANT says about triage during the Vietnam War:

The medical personnel in Vietnam practice triage — giving priority to those who have the best chance for survival. When an evacuation helicopter sets down at a field hospital, the medics run with their litters. A doctor or a nurse or even an orderly has seconds to make these decisions.

(This does not mean the most critically injured are treated first but instead those who have the best chance of survival.)

In the novel MRS. LIEUTENANT, the evacuation scenes from Vietnam writ large are part of the life of a Mrs. Lieutenant in the spring of 1970 right after the Kent State shootings. Four very different women in the novel struggle to cope with their new roles.

And in the episode of INSIDE COMBAT RESCUE, what came through most clearly was the total chaos that rescue helicopters have to fly into, and how incredible are the paramedic life-saving techniques performed in a bouncing helicopter.

The series is airing on Monday nights here in Southern California. Check your local listings for when you can watch these tremendous acts of heroism.

Click here to visit her Amazon author page at viewAuthor.at/PhyllisZimblerMiller

She also has an M.B.A. from The Wharton School and is the co-founder of the online marketing company www.MillerMosaicLLC.com
Posted by Unknown at 1:54 PM No comments: