Here is a guest post from Anak Rabanal, an LA-based filmmaker in the process of putting together a narrative short film, "Dwell Time," that explores the ramifications of undiagnosed PTSD and moral injury coupled with the practice of repeated deployments on service personnel and their family relationships.


By making "Dwell Time," we aim to increase awareness amongst the narrative film watching audience that there is a national need to formulate solutions and effective therapies for veterans returning from Iraq and Afghanistan with the "invisible wounds" of PTSD, major depression, moral injury and TBI.
Our team has spoken with multiple returning veterans who have expressed a strong desire to see their "reintegration" stories in media such as film since to share and externalize what so many suffer silently and unseen.
To bring this project to life, we have a talented and seasoned cast and crew including Riley Smith (90210, 24, Freaks and Geeks) as Johnny and Heather Mazur (Pretty Little Liars, Crash) as his deceased wife, Betsy. Our DP, Nadia Baptista, is an award-winning cinematographer whose work has been recognized at festivals such as Le Festival International du Court Metrage de Clermont-Ferrand.

"Dwell Time" follows U.S. Army Captain John "Johnny" Mayweather, who is suffering from undiagnosed PTSD and coping with the unexpected death of his wife, as he takes the final steps towards redeployment.  Johnny battles to maintain a veneer of self-possession and to control his increasingly dissociative perception of reality.  Life now lacks the emotional and spiritual pole star that was his wife, Betsy.


Rudderless and fractured, he obliterates his grief with self destructive behaviors to escape the memories of war that haunt him.  Ultimately, he seeks to return to the only place that offers any semblance of order -- the front.


Here is the link to the page for the Indiegogo campaign, which runs through September 6th, at which you can contribute funds to produce this film: http://igg.me/at/dwelltime2013

And here is a link to the teaser shot in order to give potential backers a taste of the feel and look of the short film: http://vimeo.com/71990220


Regarding the title of the film:

Dwell time is a well-known expression.  It's the term used by the military and military personnel to describe the time period between deployments during which military personnel are supposed to rest, recharge and reconnect with friends and family.

Until around 2011, the issue of the length of dwell times was one of contention.  Personnel were receiving only up to a year of dwell time for up to 15 months of boots on the ground.

In 2011, military command recognized the absolute need to increase dwell time and adopted a policy that is slowly being put into place -- two years of dwell time for every year deployed.  This is, at least, for the army.  The other branches of the military have other time structures for dwell time allotments.


Phyllis Zimbler Miller is the author of the 2008 Amazon Breakthrough Novel Award semifinalist MRS. LIEUTENANT and the co-author of the Navy thriller LT. COMMANDER MOLLIE SANDERS. Phyllis is the co-founder of the marketing consulting company Miller Mosaic LLC, which works with clients to utilize online marketing to attract more business. Read her book-related posts at www.PhyllisZimblerMiller.com
Posted by Unknown at 5:34 PM 2 comments: 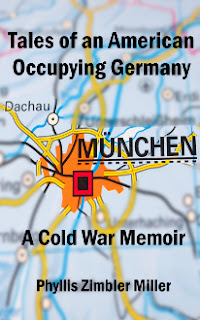 I have been very pleased with my experiment of writing chapters of my dystopian thriller THE MOTHER SIEGE on the free site Wattpad. This experience has encouraged me to simultaneously try the experiment for a nonfiction telling of the historical past — TALES OF AN AMERICAN OCCUPYING GERMANY: A COLD WAR MEMOIR.

I have all the original documents from when my husband Mitch and I were stationed with the U.S. Army in Munich, Germany, from September 1970 to May 1972. In the future I will be sharing some of these documents on my author website at www.PhyllisZimblerMiller.com

And while many of the true tales I will be telling in my Cold War memoir are humorous, underlying everything is the very real concern that, without American troops stationed in Germany, the Soviets could have marched over the border between East and West Germany to expand their sphere of Communism.

Click here to read the beginning of TALES OF AN AMERICAN OCCUPYING GERMANY.

P.S. Thanks to Yael K. Miller for creating the terrific cover for TALES OF AN AMERICAN OCCUPYING GERMANY.

Phyllis Zimbler Miller is the author of the 2008 Amazon Breakthrough Novel Award semifinalist MRS. LIEUTENANT and the co-author of the Navy thriller LT. COMMANDER MOLLIE SANDERS. Phyllis is the co-founder of the marketing consulting company Miller Mosaic LLC, which works with clients to attract more business. Read her book-related posts at www.PhyllisZimblerMiller.com
Posted by Unknown at 11:29 AM No comments: