Reality and Fictional Topic of Sexual Assault in the Military 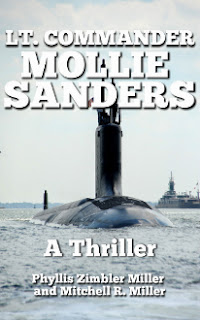 On April 10, 2014, I took part as a member of the Department of Defense's Bloggers Roundtable in a discussion by General Martin E. Dempsey, the chairman of the Joint Chiefs of Staff, about sexual assault in the military. (At the end of this blog post is the link to the entire transcript of that discussion.)

I asked two questions that my husband Mitch Miller, who follows military affairs very closely, has pondered for some time. Unfortunately, I did not get what I consider satisfactory answers to my two questions.

In addition, Mitch and I deal with sexual assault on a female Navy officer in our thriller LT. COMMANDER MOLLIE SANDERS, which is on Amazon at www.amzn.com/B005CD5OH4

Thus it was with deep interest that Mitch and I watched the April 15, 2014, episode of TV show NCIS titled “Alleged.”

The episode dealt with sexual assault in the Navy — the psychological trauma to the female junior officer who had been drugged and raped, the reaction of her male junior officer friends, and her reasons for not reporting the incident.

While, as we suspected, excessive drinking was involved, the episode went deeper to point out that higher-ranking officers might turn a blind eye or worse — spoiler alert — even commit these heinous acts.

Thus the question of how to stop sexual assault — which the female Navy investigator in the episode said the Navy is intent on “eradicating” — is a very complex societal issue.

(In a compelling scene in the NCIS episode, the director of NCIS reveals that his teenage daughter has expressed an interest in joining the Navy when she is an adult. The director says that he doesn't want these problems to exist when his daughter joins.)

The young women (and young men are also the target of sexual assault in the military) who serve our nation to protect us from harm deserve to be themselves protected from harm. Not to mention how many quality and qualified women leave the service each year because of sexual assault.

What do we as a society going forward need to do to prevent these sexual assaults in the military?

In a mil-fi novel that Mitch read, an officer committed a different but equally heinous offense. The narrator said, “In any army but ours, he’d be given a pistol and told to do the right thing.” Maybe we need to adopt that custom.

Or maybe fiction gets information across stronger than lectures about appropriate sexual behavior in the military.

Could General Dempsey require that every current and incoming military member regardless of rank or branch of service watch the entire NCIS episode “Alleged”? This poignant episode might actually help change the current environment that is tacitly allowing these attacks to happen and to go under-reported and under-investigated.

Click here to read the entire transcript of General Dempsey's statements to members of the DoD's Bloggers Roundtable, including my two questions.


Phyllis Zimbler Miller is the author of the 2008 Amazon Breakthrough Novel Award semifinalist MRS. LIEUTENANT and the co-author of the Navy thriller LT. COMMANDER MOLLIE SANDERS. Phyllis is the co-founder of the marketing consulting company Miller Mosaic LLC, which works with clients to attract more business. Read her book-related posts at www.PhyllisZimblerMiller.com
Posted by Unknown at 9:11 PM No comments: