The August 21-22 Wall Street Journal article "War: One Thing It's Good For" by Kelly Greene reported:

Millions of families of wartime veterans are failing to take advantage of a little-known benefit that could help pay for long-term care.

The Department of Veterans Affairs' so-called aid-and-attendance benefit pays a maximum of $1,949 a month to married veterans who qualify. Single veterans and surviving spouses may be eligible for smaller payments.

To qualify, veterans must have served at least 90 days of active military service, including at least one day during a war, and not have been discharged dishonorably. (The rules are stricter for wartime veterans who entered active duty starting Sept. 8, 1980.) They also must meet certain thresholds for medical need and financial need. 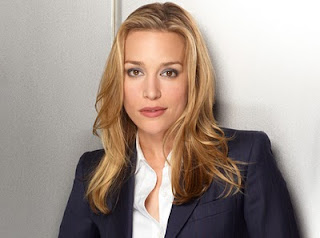 In the new drama series “Covert Affairs” on USA Network, Piper Perabo stars as Annie Walker, a 28-year-old CIA trainee yanked from her training at “The Farm” for a critical mission in D.C. and then kept at CIA headquarters rather than finishing her training.

What makes this spy thriller believable (as a TV drama) starting with the first episode is the scene in which Annie is hauled in to speak with a trainer and she believes she is about to be cut from training.

She blabbers that she’ll take retake the exercise. She asks if it was the driving course or the deception training.

Then she is told she is being yanked from training to immediately report to Langley – CIA headquarters.

And, yes, she does silly newcomer things and is then introduced to her new secret world by Auggie Anderson (played by Christopher Gorham), a Langley analyst blinded on a special ops mission. (His computer has a Braille keyboard.)

What I like best about this new series is that it is relatively realistic. Perabo is not Angelina Jolie in the new movie “Salt,” a CIA operative who functions more like Spider Man than a real CIA field operative.

Perabo’s Annie Walker is an active field agent but she doesn’t do any superhuman feats.

What’s more, during her polygraph exam in the first episode it is established that she speaks six languages. (Thanks to having traveled around the world in search of herself.) And this language ability is integrally woven into the episodes.

Although “Covert Affairs” takes the usual TV dramatic license with the realities of jurisdiction between the CIA, the FBI and local police, it does provide an interesting insider’s look into CIA covert operations.

I highly recommend this show for its entertaining plots and for its realistic portrayal of a female action heroine. And the show rightly takes its place alongside a sister show on USA Network that I also highly recommend – “Burn Notice” – in which a female operative is also realistically portrayed.