Businesses Can Make Accommodations for Vets With PTSD

The LA Times article "Many Veterans With PTSD Struggle to Find Supportive Employment" by Alexandra Zavis first details the problems that vets who suffer from PTSD have with getting or holding down a job.

But in my opinion the most important part of the article follows this first segment. This second part describes how organizations and companies are making accommodations for vets suffering from PTSD.

Here's an example from the LA Times article of a vet and the employer who is helping him:

Joshua Stout is one of 80 people recruited through Northrop Grumman's hiring program for severely wounded veterans from Iraq and Afghanistan. A former Marine who served in both wars, he now works as a project manager at a plant in San Diego that is developing an unmanned surveillance plane for the Navy.

The company consulted occupational nurses on how to help the 27-year-old manage PTSD and a brain injury. They showed him how to set reminders on his computer and arranged his cubicle so co-workers could not come up from behind and startle him.(My boldface)

Stout said he struggled to learn how to manage databases, but his supervisor worked with him until he could remember the steps.

This is just one example of how accommodations can be made to "pay back" the men and women who have served in defending our country.

Read the entire article now and then, if you have hiring responsibility at a company, consider how you can accommodate hiring a vet with PTSD.
___

DoD Encouraging Military Personnel and Their Family Members to Vote

The Department of Defense is working with the Federal Voting Assistance Program to encourage military personnel and their family members to exercise their right to vote.

Absentee Voting Week is held from Sept. 27 - Oct. 4. During Absentee Voting Week, voter assistance officers will encourage voters to complete and mail their absentee ballots so that they are received by local election offices in time to be counted for the November general election.

In addition, voters may use the new electronic absentee ballot form if they didn't receive one from their state.

“My Loved One Went to War – Someone Else Came Back” 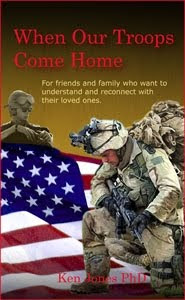 This is a guest post by Ken Jones, PhD:

War will eventually recede. The media will move on. The memories of combat will remain with our troops for a lifetime.

The families and loved ones of those now returning from combat want desperately to understand what has happened to their returning warriors.

Why are the warriors that they waited, longed, and prayed for now so seemingly distant and unapproachable?

It was the same for me 40 years ago. In January of 1968 I turned 20. I had been in Vietnam for 10 months. My unit of the 11th Cavalry was operating on the Cambodian border.

In March of 1968 I returned to the world; I felt 100 years old. I quickly learned never to talk about Vietnam, or admit that I had been there.

There was no such thing as post-traumatic stress back then, and I never heard of traumatic brain injury.

The anguish of what I had seen and done and heard and smelled played over and over in my nightmares and intrusive thoughts. Combat survivors do not remember their experience. They relive it.

For 13 years I sucked up the pain. I got married, had a family, and went into business.

On the outside I was successful. On the inside I had only two alternatives left – insanity or suicide.

I began to write, first on 3x5 note cards and then on yellow tablets.

I also got very lucky. On a business trip to Anchorage, Alaska, I stopped by the Vet Center.

There I found someone who understood what I said, and assured me that I was not going insane. He was a former combat Marine who had also been in Vietnam. Now he was the Vet Center team leader.

Finally, there was someone I could talk to.

The notes I had scribbled to myself became the book WHEN OUR TROOPS CAME HOME.

Working with other combat vets we found that there was a very similar pattern of experiences that resulted in our combat-induced post-traumatic stress.

This pattern, this progression to becoming combat survivors, is described in a second book, LIFE AFTER COMBAT.

Both of these e-books are offered FREE, as a gift to the families and friends who desperately want to understand what has happened to their returning warriors.

These e-books are also offered FREE to our warriors as one more voice reminding them that they are not alone.

Get WHEN OUR TROOPS CAME HOME.

Help Our Deployed Troops With Their College Education

Here is a message sent by Storm Williams to the members of the Facebook group Books For Soldiers (reprinted with permission):

This week's mission is to support our troops by helping them with their college education while deployed overseas.

Books For Soldiers has a sister site -- http://collegeforsoldiers.com

This site was built because soldiers, especially younger ones who enlisted right after 9-11, cannot get a college education because of irregular deployment periods, lack of access to the web, stop loss policies and, most importantly, MULTIPLE rotations.

These conflicting schedules mean that most of our troops serving in Iraq, Afghanistan and other hardship duty cannot continue their education.

We came up with a solution to help them with college, allowing them to earn a lot of college credit or even complete their college education while siting in a ditch in the harsh wilderness of Afghanistan.

The site has online guides that soldiers can use to get real, REGIONALLY ACCREDITED college degrees using several credit earning methods.

The guides are available on the site or can be downloaded as a single PDF. Here is the 15-page "Guide To Rapid Graduation"

The guide contains step-by-step instructions on what to do, plus recommended colleges that are excellent choices for our men and women in uniform.

The other feature of the site is the textbook request feature. Soldiers can request a college textbook from us and we will do our best to find a copy and ship it to them.

Lastly, if you always wanted to get your college degree but got sidetracked by life, our "Guide To Rapid Graduation" works the same and yields the same results for civilians back home.

Your job this week is to download the PDF and tweet about it, post to your wall about it, tell every soldier you know about it or families you know that have loved ones serving our country.
___

I had the privilege of seeing the 2010 documentary “The Big Uneasy” at the 7:00 p.m. showing at the Grove in Los Angeles at which the two producers (Karen Murphy and Christine O’Malley), the cinematographer and the Army Corps of Engineers whistleblower were introduced before the documentary unspooled.

And the only reason the documentary didn’t shock the hell out of me, with its overwhelming evidence that Hurricane Katrina’s devastation of New Orleans was not a natural disaster but a man-made disaster, was because I’ve been reading the 2007 book “The Storm: What Went Wrong and Why During Hurricane Katrina – The Inside Story From One Louisiana Scientist” by Ivor Van Heerden (who lost his job due to his commitment to revealing the truth) and Mike Bryan.

Harry Shearer, the writer/director of the documentary, was in New Orleans at the one-night screening there. (The documentary was shown only on August 30th across the country in select theaters.)

Here’s my unscientific recounting of the man-made disaster in New Orleans:

• The Army Corps of Engineers knew since a 1988 report that the restraining walls of the levees and of the Mississippi River-Gulf Outlet canal were not sufficient.

• Hurricane Katrina’s surge did NOT cause the immense devastation of human life and property (the levees were NOT overtopped). The breached levees were caused by the insufficiency of the depth and strength of those levees. (Water worked itself under the levees and caused the breaches).

• The most upsetting part of the documentary is the ongoing cover-up being undertaken by the Army Corps of Engineers as well as the compelling portrayal that, while the levee breaches are being fixed, the weak levees that were not damaged in Katrina are NOT being re-engineered to withstand the next big hurricane. In other words, the insufficient levees are being left as they are to be breached next time.

If this documentary were to be compulsory viewing by all U.S. politicians (the documentary makes clear why this is such a political matter), perhaps a few courageous members of both houses of Congress would actually demand that the hurricane protection of New Orleans and the surrounding areas be built to the standards of Amsterdam.
___

And I hope everyone will click through on the link to learn more.

FYI -- For those of you not active on Twitter, the sot stands for support our troops and the # in front of words on Twitter indicates a topic.
___