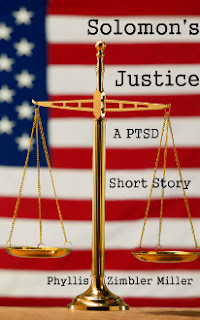 While honoring this Memorial Day the men and women who died serving in the U.S. Armed Forces, we should also remember the veterans who carry both visible and invisible scars from their military service.

One of the most debilitating invisible scars is that of PTSD.

Some of you may know that I am working on a fiction project to attract more attention to the need for people suffering from PTSD to get help — www.SolomonsJustice.com

(The image above is for the cover of the Kindle short story SOLOMON'S JUSTICE, which I hope to publish very soon.)

And in honor of Memorial Day, I wanted to share a scene from my new YA short story PINKY SWEAR. The story takes place in 1964 — before the term PTSD was used — but the aftereffects of combat still took their toll as the excerpt below demonstrates:

That afternoon, after their high school classes were over for the day, Donna and Laurel were in Laurel’s room listening to “Under the Boardwalk.” From the next-door quarters sharing a wall with Laurel’s family’s unit came the sound of a man screaming.

Laurel shook her head. “He served in Korea and his wife told my mother that he has been like this since then.”

“Why is he still in the Army?”

Laurel started the record again. “He manages okay most of the time. Just sometimes things get to him.”

“Can we do anything?”

“He has young kids. Let’s go next door and see if we can take them to the park.”

Next door Mrs. Stewart, a black woman in her mid-30s, opened the door and beckoned Laurel, followed by Donna, inside. Two small children hide behind their mother.

Laurel coaxed one child into her arms, and Donna bent down and picked up the other child.

“I’m sorry for the ruckus,” Mrs. Stewart said. “The post hospital gave him some new medication today and it doesn’t seem to agree with him.”

“This is my friend Donna,” Laurel said. “We came over to see if we could take the kids to the park for you.”

Donna saw the relief flash across Mrs. Stewart’s face. Mrs. Stewart said, “If you would walk them over there and watch them, I would really appreciate it.”

Still holding one child, Donna followed Laurel out and watched as Laurel gestured to the little red wagon leaning against the outside wall. The girls plopped the kids into the wagon and Laurel grabbed the handle.

Donna tagged along beside Laurel, thinking about Sgt. Stewart. He had come back from Korea, but what had happened to him there? She asked Laurel about this.

“He was in one of the first integrated Army units. President Truman integrated troops during the Korean War. No one says what he’s suffering from.”

Donna hesitated before speaking. “If our fathers get sent to Vietnam, do you think they might become like Sgt. Stewart?”

Laurel looked back at the kids in the wagon. “No way of knowing.”

If you want to read the entire YA short story PINKY SWEAR for FREE now, you can download the Kindle format at www.booksicals.com/books — SCROLL DOWN the page until you come to PINKY SWEAR and then click on “Special FREE Ebook.”

Don't have a Kindle? No problem. You can get a FREE Kindle app for your iPhone, iPad, Android, PC or Mac at http://budurl.com/freeKindleapp

(The Donna in this short story is the same Donna — one of four new U.S. Army officers' wives — featured in the novel MRS. LIEUTENANT, which takes place at Ft. Knox in 1970. Click here to read about this novel and two other military fiction novels written by former military spouses.)

And do share this post and the link to the short story with people you think will appreciate it.

Click here to visit her Amazon author page at www.amazon.com/author/phylliszimblermiller

She also has an M.B.A. from The Wharton School and is the co-founder of the online marketing company www.MillerMosaicLLC.com
Posted by Unknown at 12:35 PM 2 comments: