In Honor of Memorial Day: The Vietnam Veterans Memorial 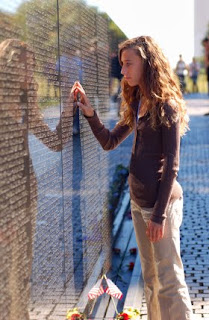 In honor of Memorial Day, below is the beginning of the epilogue in my novel MRS. LIEUTENANT that describes a visit to the Vietnam Veterans Memorial:

From a distance the grass appears unmarred, stretching in a straight line from the front of the Lincoln Memorial to the reflecting pond, then rising slightly to the Washington Monument and on to the Capitol building.

Only as Sharon reaches the actual location in Constitution Gardens can she see the cutout in the ground for the memorial wall designed by Maya Ying Lin for the Vietnam Veterans Memorial.

The wall can be viewed by taking a downward sloping path from either the east or west end. The first black granite panel is a sliver on Sharon’s left as she starts down the path. The panels grow in height from both ends, until at the bottom of the path the two sides meet as tall wall panels.

The names of the dead cover the surfaces of the panels, name after name in continuous flowing lines.

A man parks his wheelchair in front of a panel. Sharon glances at his face. He's about the right age. Is he remembering his buddies?

And who has left the box of Cracker Jacks at the base of another panel? It's out of place surrounded by flower wreaths and miniature American flags, even a cap with the slogan "Reenlist."

A woman bends towards one panel, her left hand pressing a sheet of paper against a name, her right hand rubbing a pencil over the paper's surface. A rubbing. Like the rubbing of a tombstone.

"It was a difficult decision," Sharon hears a young man – probably in his twenties, too young to know firsthand – say to his companion. "Whether to go."

Two teenage boys turn to their mother. "Thanks for taking us, Mom," they say.

An African-American family is on the path in front of Sharon. The man pushes a stroller with a sleeping baby while his wife holds the hands of twin girls.

Sharon flashes to Donna Lautenberg’s description of the black woman standing in the clinic line at Ft. Knox feeding bread to her young son. The woman had been eight months pregnant with this son when her husband was killed in Vietnam. Is this man here to show his children his father's name on the wall, the father he never knew?

Ahead of Sharon appears the spot where the two sides of the wall meet. At the bottom of the last west panel is the date 1975 – the last year of casualties – with the inscription:

Our nation honors the courage, sacrifice and devotion to duty and country of its Vietnam veterans. This memorial was built with private contributions from the American people. November 11, 1982

At the top of the first east panel appears the date 1959 – the first year of casualties – with the inscription:

In honor of the men and women of the armed forces of the United States who served in the Vietnam War. The names of those who gave their lives and of those who remain missing are inscribed in the order they were taken from us.

"In the order they were taken from us."

How eerie to be walking this path now. Richard Nixon, the president who escalated and then ended the Vietnam War, has just died at the age of 81. Many of the Vietnam War dead lived less than one-fourth of that time.

Sharon stops at a panel and randomly counts the minuscule round indentations representing 10 lines of names. She is not looking for any specific name...

The complete novel is on Kindle for 99 cents at http://budurl.com/MrsLTKindle
Posted by Unknown at 10:48 PM No comments:

Iraq and Afghanistan Vets Have Higher Rate of Respiratory Ilness

Veterans who served in Iraq and Afghanistan have a higher rate of debilitating respiratory illness than those deployed elsewhere, according to a new study that bolsters concerns among some medical professionals and members of Congress about the potential harm to troops from toxic chemicals and dust in the Middle East.

The findings, which will be presented Wednesday at the International Conference of the American Thoracic Society in Denver, place renewed urgency on getting at the root of why some young, previously healthy soldiers have been returning from the Middle East complaining of symptoms including shortness of breath and dizziness. In many cases, the soldiers can no longer pass a required physical to continue with active duty.

There appears to be "a modest increase in the incidence of respiratory symptoms in those individuals who have returned from deployment to Southwest Asia," said Craig Postlewaite, director of the Department of Defense's Force Readiness and Health Assurance office.