In Honor of the Anniversary of D-Day: Excerpt From Cold War Memoir 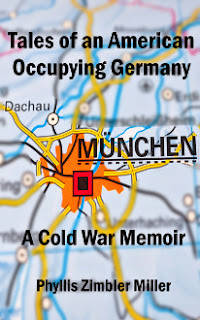 Chapter 27 of my Cold War memoir TALES OF AN AMERICAN OCCUPYING GERMANY begins with a visit to the D-Day beaches of Normandy in April 1972:

Mitch and I stood at the site of the Allied D-Day invasion during World War II — the audacious landing in Normandy that began on June 6, 1944, and eventually led to the end of the war.

We were the only ones here on this windswept French landscape, the five landing beaches spread below us as Mitch explained the invasion to me.

When we reached Pointe du Hoc, a 100-foot cliff with Nazi concrete gun batteries still visible at the top, I gasped.

“To get off the landing boats and face this cliff, they had to know they would die,” I said.

Then he added, “By the time my father landed in France, Normandy was already secured.”

The enormity of this military operation was almost too much to imagine, especially as the surrounding landscape was now so barren.

Equally disquieting was the thought that the success of the invasion did not immediately end the war. The Allied forces had to fight the Nazis for 11 more months after D-Day.

And the ultimate victory was not soon enough to save Anne Frank, whose hiding place in a secret annex Mitch and I had just visited in Amsterdam.

Betrayed by an informer, Anne and the others had been arrested two months after the D-Day invasion, on August 4, 1944. Then Anne died in the Bergen-Belsen concentration camp in March 1945, weeks before the British liberated the camp and two months before the Nazi surrender.

Mitch and I turned away from the desolate landscape.


Phyllis Zimbler Miller is the author of the 2008 Amazon Breakthrough Novel Award semifinalist MRS. LIEUTENANT and the co-author of the Navy thriller LT. COMMANDER MOLLIE SANDERS. Phyllis is the co-founder of the marketing consulting company Miller Mosaic LLC, which works with clients to attract more business. Read her book-related posts at www.PhyllisZimblerMiller.com
Posted by Unknown at 2:00 PM