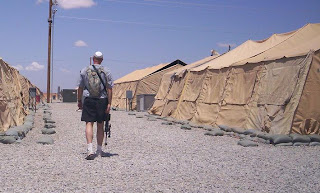 Here is a guest post sent today from by U.S. Army Staff Sergeant Big Tobacco (check out his own blog at www.big-tobacco.blogspot.com):

"Don't take this the wrong way, but people like me don't do things like that. So why do you?"

I'm confused by this statement. I look across the table at my date. Her face is as perfect as a Russian doll. Her blond hair falls in ringlets around her shoulders. She is so beautiful that I am willing to forgive the question.

Yet the question haunts me. What does that mean?

Why did I release my attachments? Why did I learn to suffer? Why don't I feel special?

And don't do things like what? Serve your country?

I was like her growing up. My father spent four years in the Air Force so that he would not get drafted into the Army for two. Rich Jews from the suburbs didn't join the Army and they certainly didn't join the Infantry. Other people did that.

"Gabora tells me you are in the Army," her mother says when we finally meet. "When do you get out?"

"I'm thinking of making it a career," I say.

She almost chokes on her brisket.

I had a book in my bedroom years ago: "The Story of My Life" by Moshe Dayan. I went to sleep dreaming of thundering across the Sinai in my APC, giving the Egyptians a run for their money. I crossed the and set up a hasty defense as the mortars plunked into the sand. Moshe Dayan, now that was a life. If someone wrote a book about my life, would anyone want to read it?

"Is that a ninja star on your neck?" one of my Army buddies asks while I am in the shower.

I progress. I carry that damn Dragon anti-tank missile up and down the hills of , waiting for enemies that never appear. I drive a track through the mud, relishing the feeling I get when all of us come up on line, guns blazing, dismounts screaming, shell casing tumbling to the ground. Someone thinks I am a leader. They give me a fire team.

"Hey, sarn't. Is it true that Jews have sex through a sheet?"

"No," I say. "Years ago, people would hang their tallit out to dry on clothes lines. There is a hole in a tallit for your head. Non-Jews saw the hole and made their own assumptions about its purpose."

"So you just put your head in it when you're going down?"

"Yeah, private, all the time."

I have no menorah so I kick sand over at the pistol range until I turn up nine empty shell casings. I glue them to a paint stick. We turn death into life. We use birthday candles from the dining facility. The three Jews in the battalion light the candles on the second night of Hanukkah.

"Did you see the chaplain's t-shirt?" one of my soldiers asks.

I squint at the paunchy chaplain as he orders a double hamburger in the short-order line at the dining facility. His shirt reads "Repent or Die."

I realize that if my religion believed in hell, I'd probably be first in line for the elevator.

Towers fall. I step on a ribcage at Ground Zero and nothing funny comes to mind about that. I have a child and swear that I will keep Moshe Dayan's biography under lock and key. I stand at a bridge wondering how I am supposed to stop a 747 with 10 rounds from a rifle.

I get promoted to squad leader. I live at a checkpoint in the middle of the desert, wondering if something, anything is going to happen. I sit and have hot, sweet tea with the police. My G-d, no wonder everybody here is diabetic, this is like liquid sugar. We discuss music and movies. They tell me how much they would love to come to and meet a nice American girl. They ask if I am a Christian. I know that the truth would make my squad a target of opportunity.

So I tell them that I follow the Phillies religiously.

I break the fast on Yom Kippur with Air Force airmen after patrolling the mud-caked streets of . My second son is born. Life returns to normal.

"So you can get out of it, right?" My neighbor asks after I tell him that I will deploy to . I live in a Jewish neighborhood in and am the only soldier in my synagogue.

"But you have kids?" he says. "Maybe if you talk to them, they will let you get out of it."

Learn to suffer. Release your attachments. You are not special.

Some idiot makes me a platoon sergeant. Now I have 32 men and women. Many of them are poor Puerto Ricans and blacks from places like , and . I'm the first Jew many of them have ever met.

They drop pennies on the floor of the barracks when I walk inside. They leave "The Passion of the Christ" on my cot. I watch it. It's a good movie, but “Braveheart” was better. They are joking, pushing me to see how much I can take. It really is endearing. As long as they are making fun of me, they like me. The day they stop making Jewish jokes is the day I better start looking under my cot for grenades.

I live a life of meetings and lists. I am on call by my lieutenant 24 hours a day. Soldiers wake me up in the middle of the night because they have a problem. I get my new rifle and now my body is whole again.

"Is that pork or turkey?" I ask the dining facility worker while pointing at a brown patty of something for breakfast.

"It is uh?" The worker says in broken English. He doesn't understand the question. "It is sausage patty."

"Thanks, dude. I'll just have some eggs."

I sit down to eat my eggs and cereal. My first sergeant comes over to my table and sits down.

"I'm not special, Top," I say. "You'll never hear me complain. People like me don't do things like that."

Oh, and by the way, the blond at the beginning of this story? I married her.

And I still don't know the answer to that question.